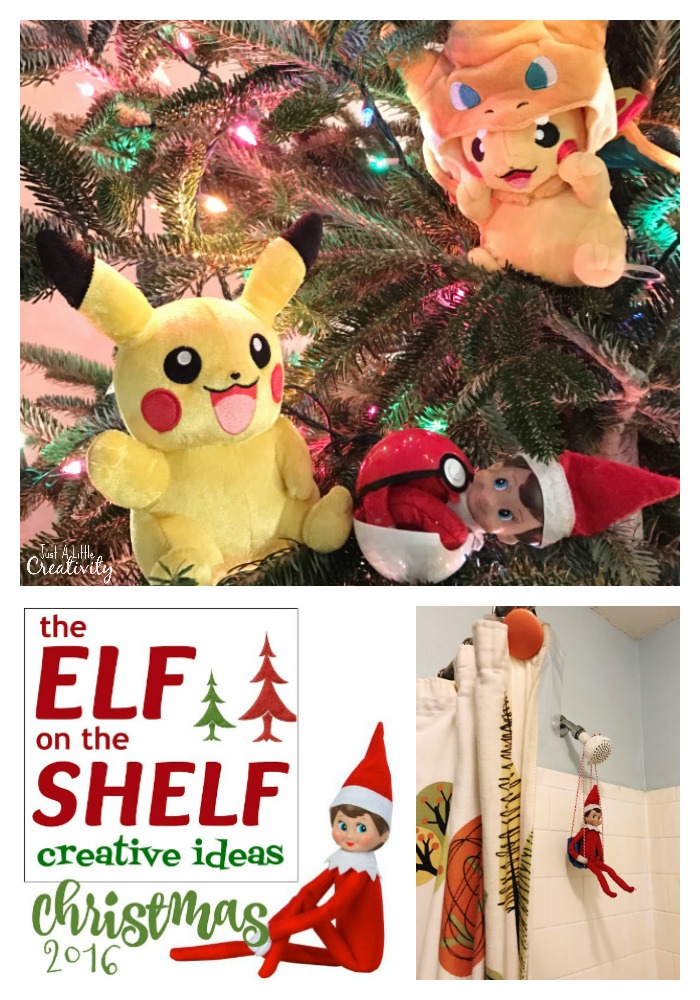 Elf on the Shelf is back, and this year might be better than ever!

Our little Elf Ringo Bells made his debut for 2016 on December 1. This page will be updated daily (or at least close to daily) to not only show you his adventures with out family this Christmas, but to also inspire you and give you clever ideas and funny inspiration for your own elf.

This is our 4th year with him, and so by the end of this one, that will be 100 different and unique ways we’ve hidden the elf. And, I’ve shared all of them (I think. Maybe I’ve missed one or two) here on the blog, but also on my Instagram page. I’ve never done the “you can’t touch the elf” thing with my kids, and they know it’s me moving it around. I actually debated not doing him this year simply because the kids are older now, but even the teenagers got sad about not seeing the little mischief maker around. So, we invited him back.

I’ve learned a few things over the years that have made him easier to do, and to take the pressure off. First of all, as long as you actually take the time to do something with him each night, the kids love it. But if you forget to move him, Pinterest is FULL of ideas to explain it if you want to. In other words, you don’t have to be super creative, the kids won’t mind.

Last year, I used this tutorial from All Mommy Wants to make our elf posable. It made it so much easier to pose him.

And this year, I’ve purchased the Elf on the Shelf Scout Elves at Play Kit. I got mine from Target, but here’s an Amazon affiliate link to make it easy for you to grab one of  your own if you’d like. It’s got a lot of great ideas and tools you can use to make the “Oh man! It’s midnight, and I still have to do something with the dang elf” moment a lot easier! I’ve also seen Elf on the Shelf Pet Reindeer and an Elf on the Shelf St. Bernard on Amazon, so those might be fun to use too.
I’ll include as many Amazon links to products I use this year that I can, so you can easily find them and use them too.

The first day, I tricked the kids into thinking I forgot all about the elf. Disappointed in my obvious lack of Christmas creativity, they dragged themselves to the car to head to school, only to find him waiting for them there! I got my Cool Mom card back, I think. 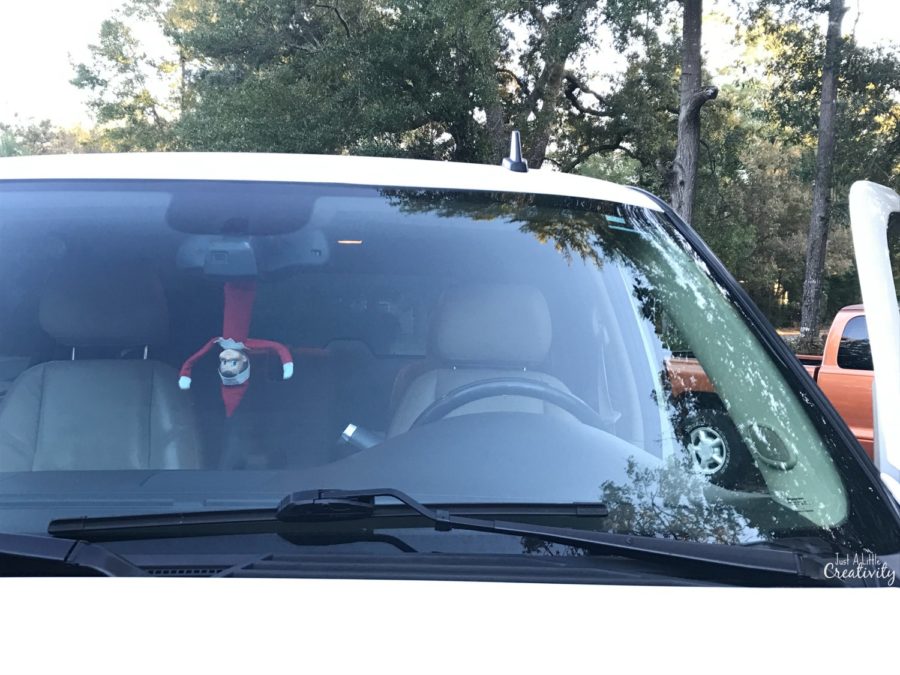 Pokemon Go is all the rage with my youngest (as you can tell from our Pokemon Pumpkins and Pokeball Christmas ornament) so obviously Ringo Bells had to get in on that action. Unfortunately instead of catching the Pikachus himself, he got caught up in the Pokeball! 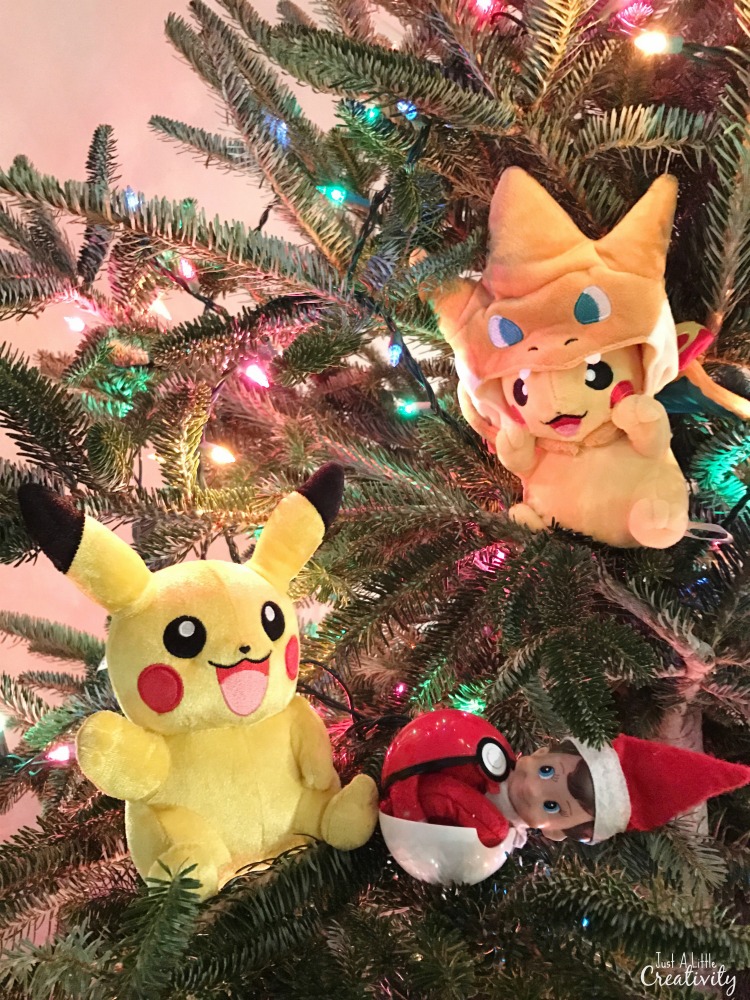 Swinging in the Shower-

If the goal was to scare the first teenager who decided to take a shower in the morning, then it was a success. Apparently sleepy teenagers don’t love opening the shower curtain to find the Elf swinging from the shower. The swing is included in the Play Kit (I told you it’s got some cool stuff in it!) 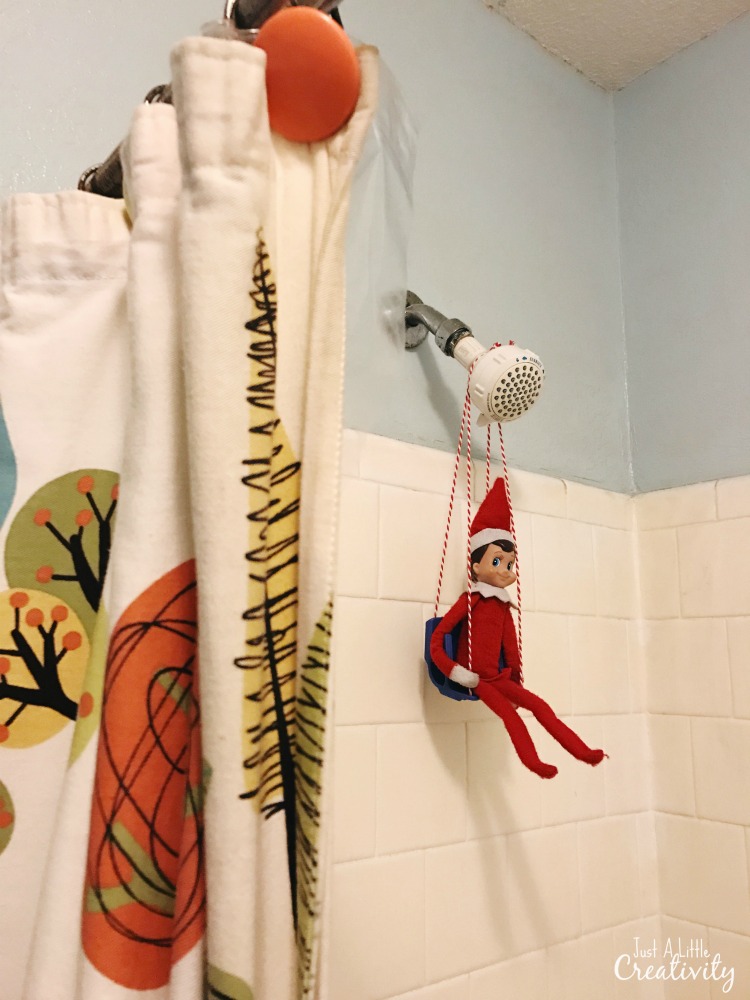 Apparently Ringo Bells is as into XboxOne as the teenager. Of course he is. 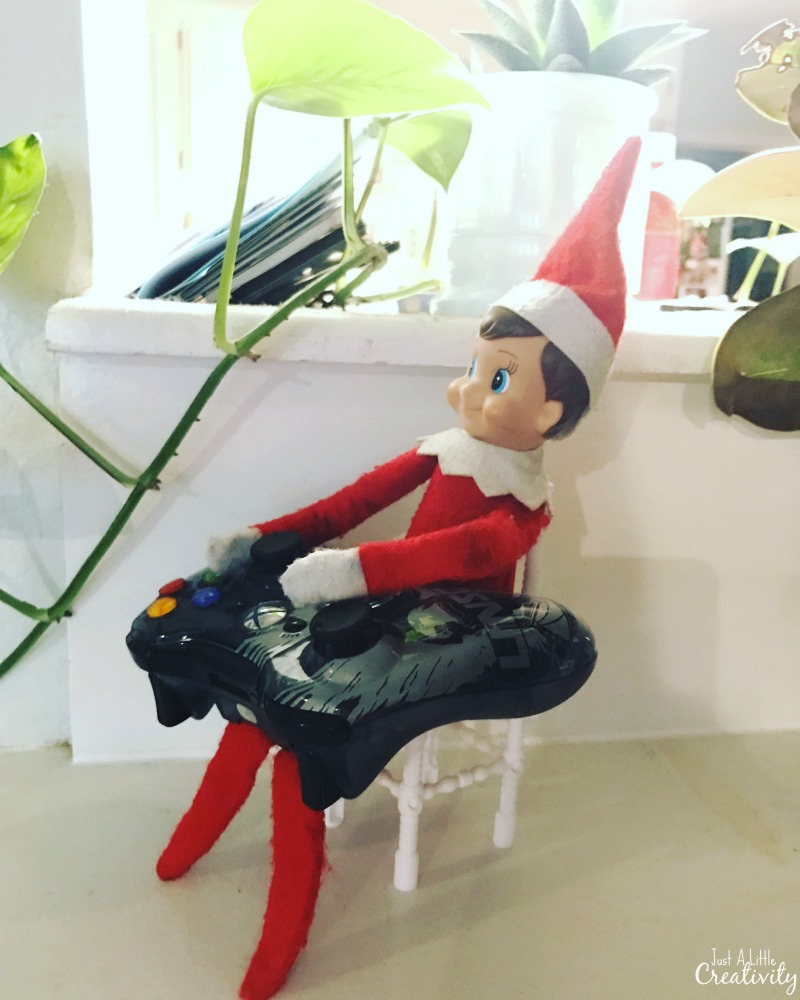 Eating all that popcorn, not sharing at all. 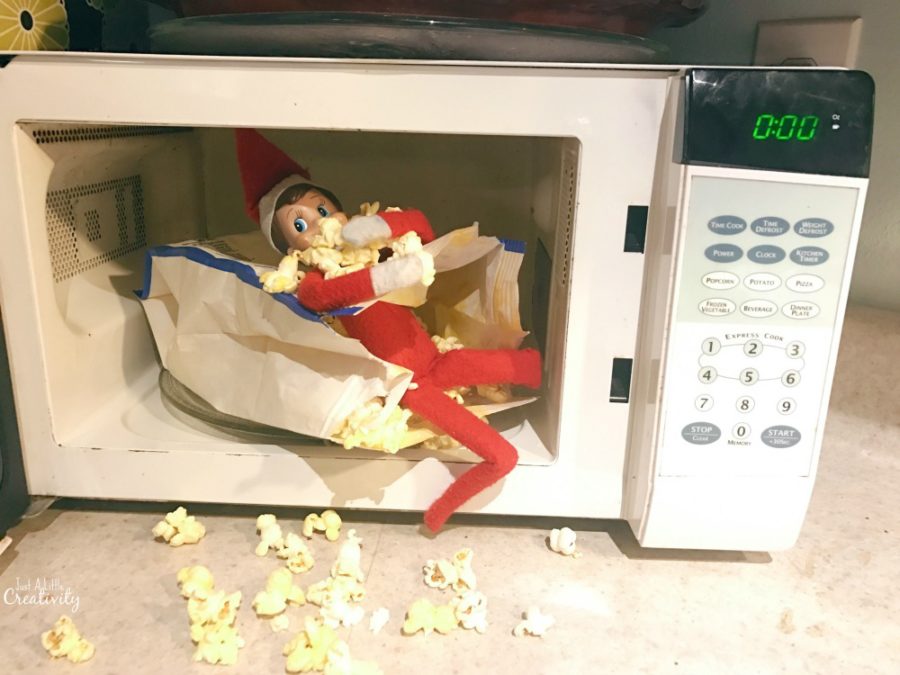 An Explosion of Silly Bandz!

Apparently when you open an old box of Silly Bandz the kids used to collect, you’re likely to get caught in the chaos! 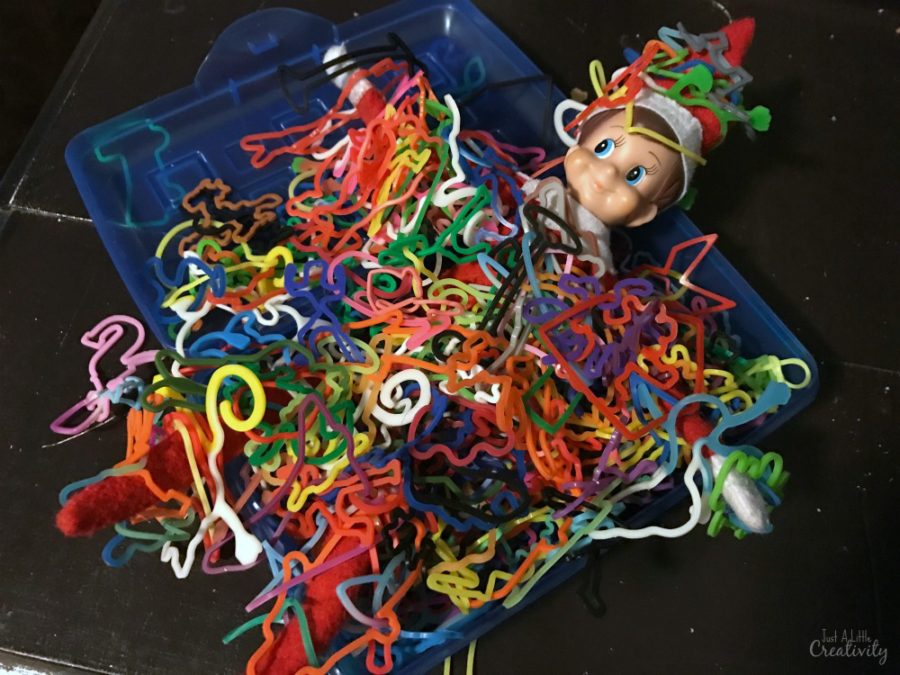 Not quite a scarecrow, this flower costume is much nicer I believe. 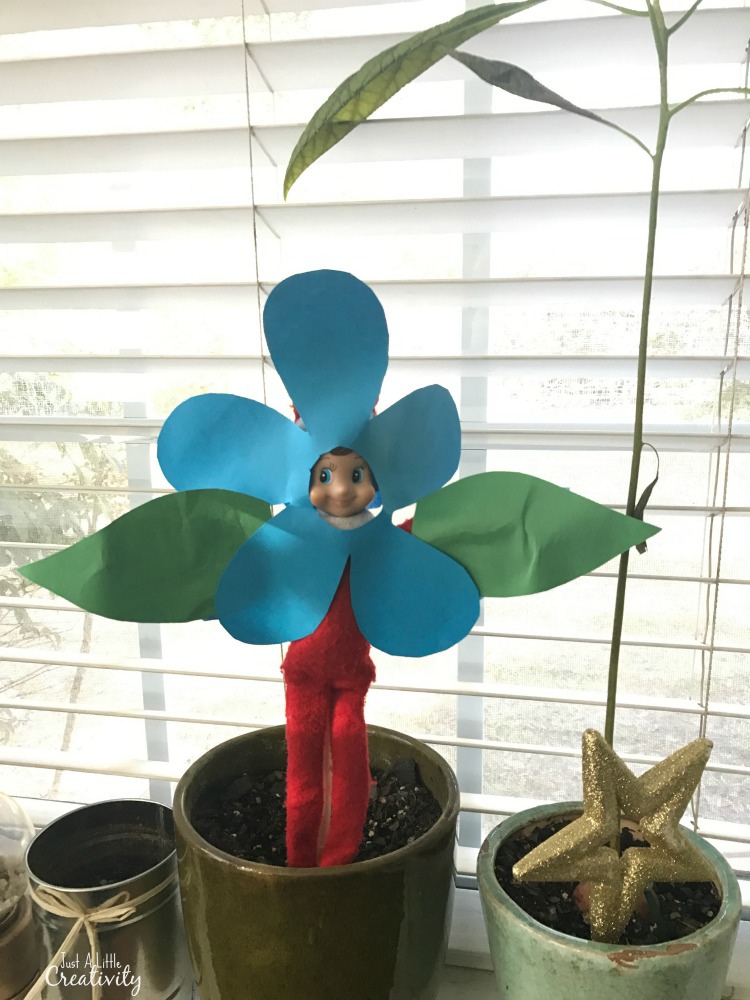 Elf on the Shelf had hot cocoa and sugar cookies ready for the kids when they woke up for breakfast. 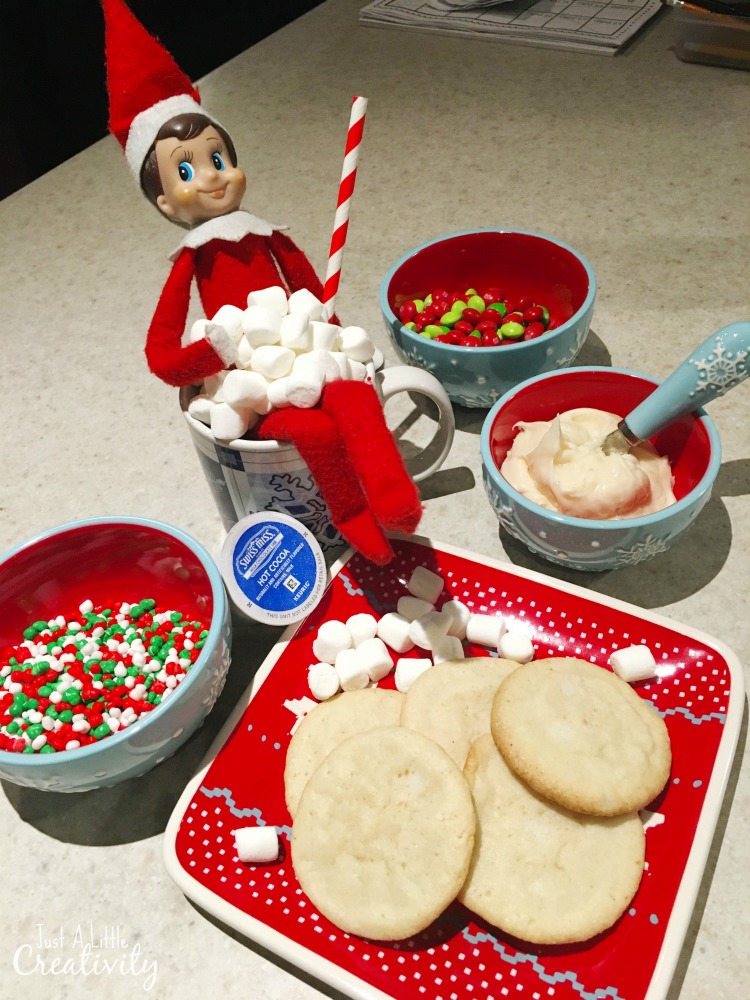 I think I  might hire this guy to help me finish my Etsy shop orders! He does a great job! 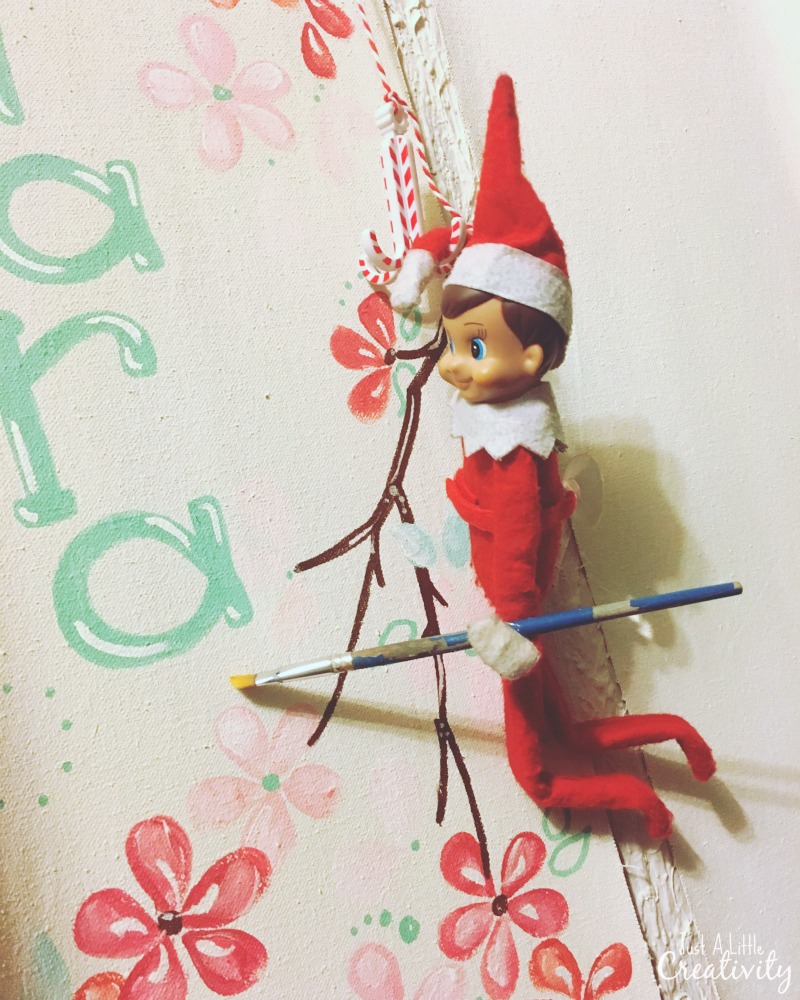 Do you have Whataburger near you?
If so, then maybe your like me and can’t figure out how a teenage boy possibly fell asleep before he ate his greasy dinner. But he did, and Ringo Bells helped himself. 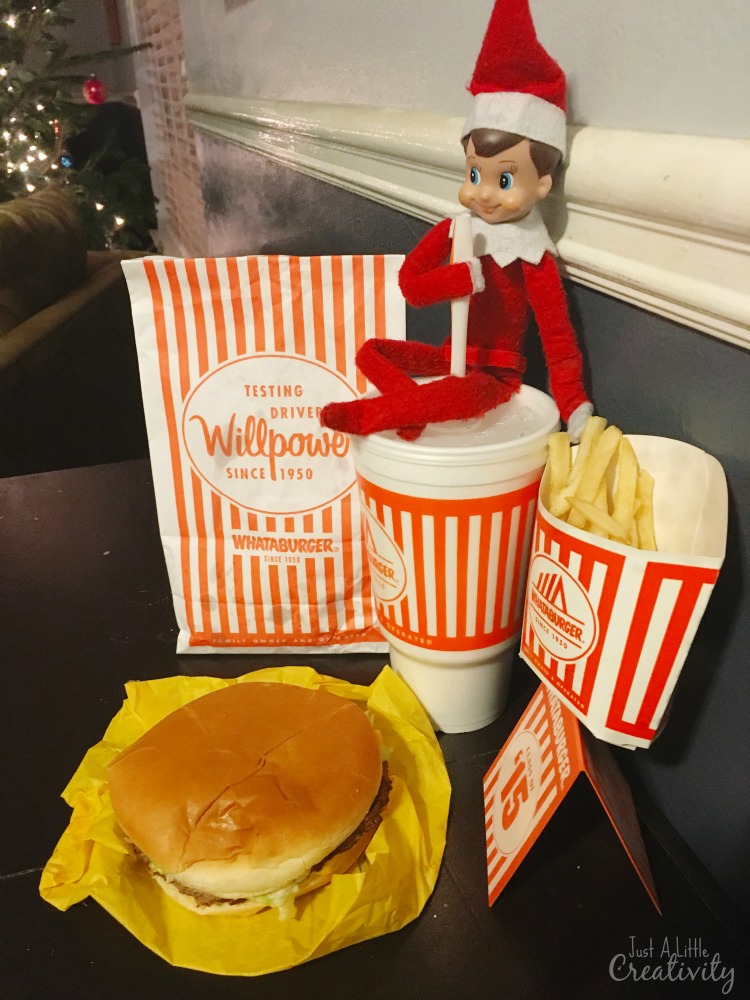 I think he must’ve lost on truth or dare, because I wouldn’t want to be in that tank either. 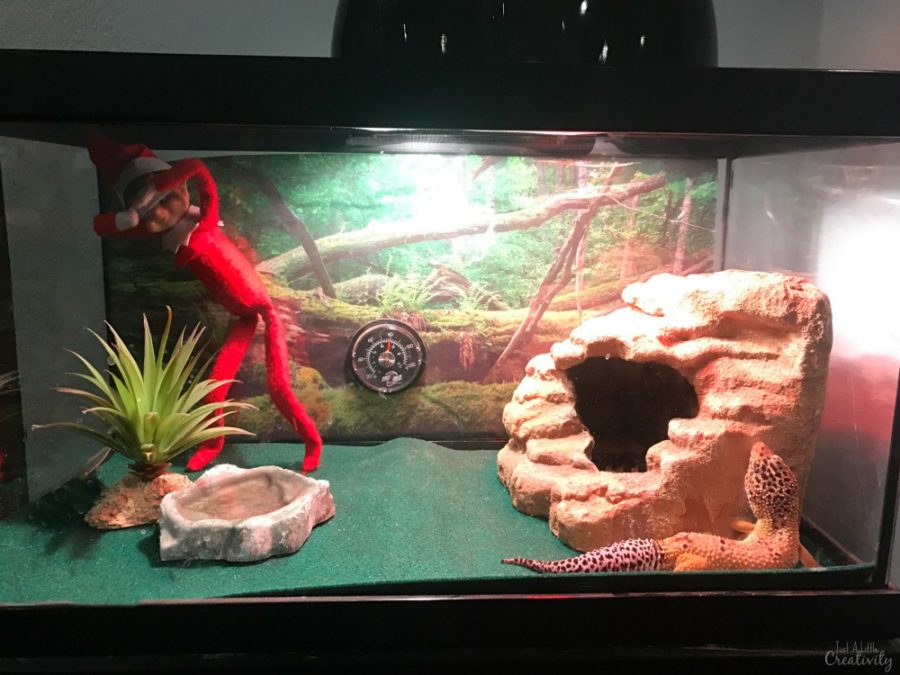 Inspired by the movie Elf- 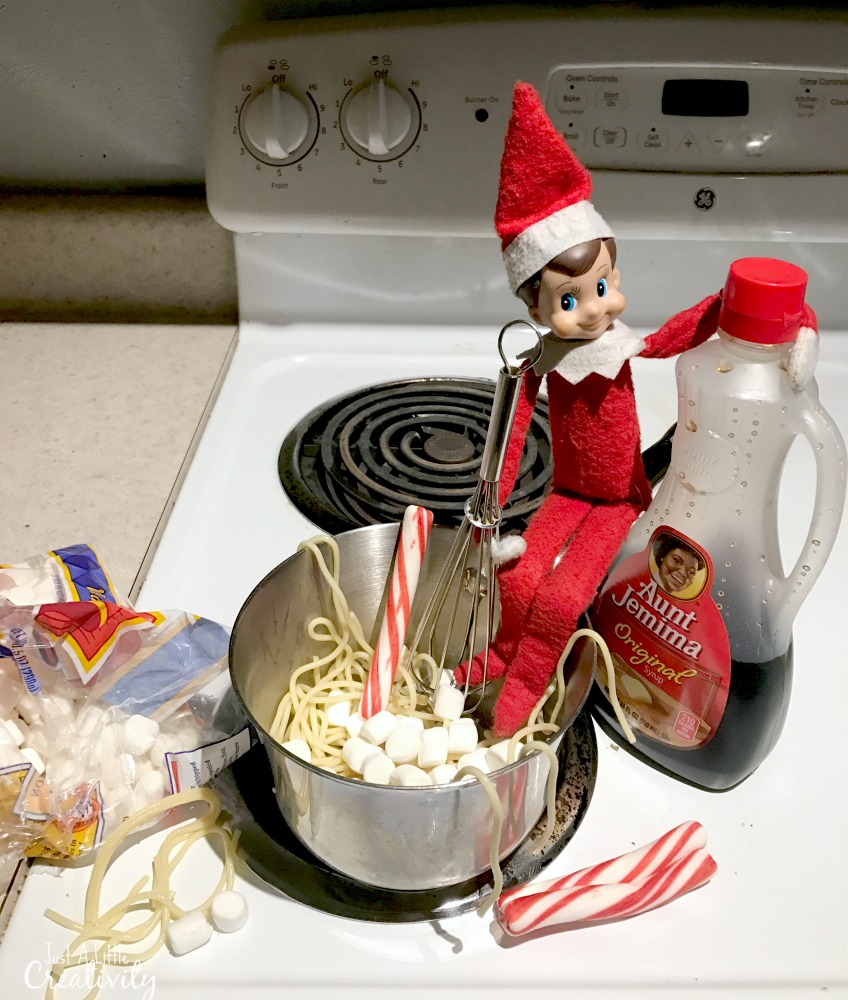 Elf on the Shelf scavenger hunt-

The Scout Elf Play Kit has a great scavenger hunt game, the kids liked this one a lot. Mom, not so much since they were scavenger hunting when they were supposed to be getting ready for school. We were late that morning. 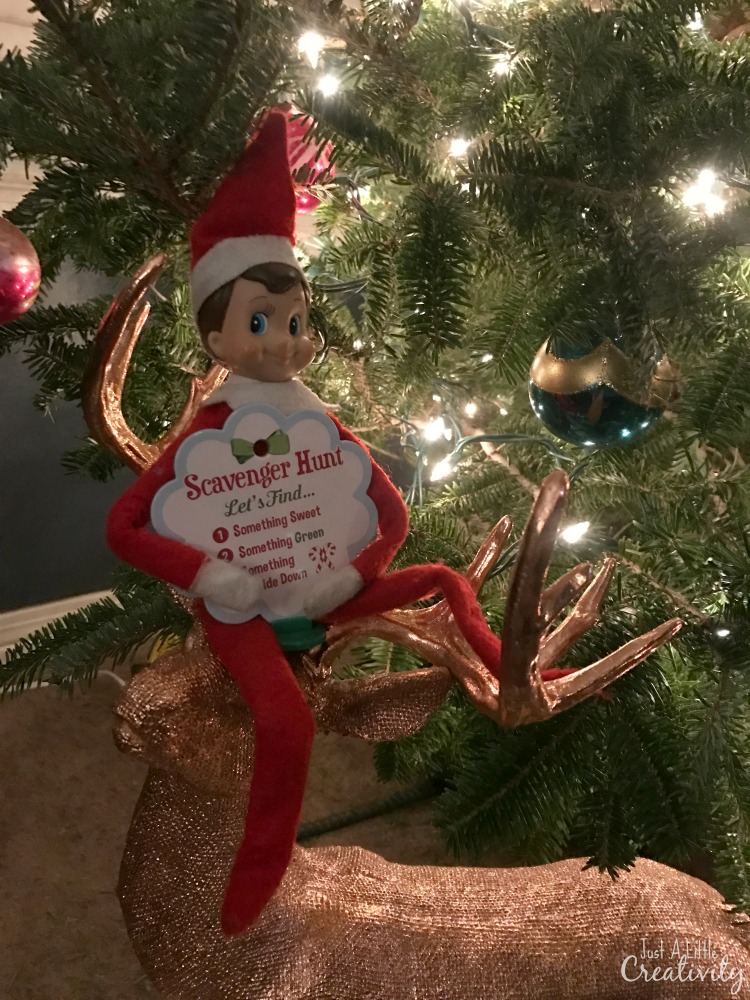 Elf on the Shelf loves the Chicago Cubs-

The grappling hook in the Elf play kit made it easy for the elf to grab his baseball glove, and try to scale the Chicago Cubs scoreboard. Guess he didn’t know it was only a photograph. 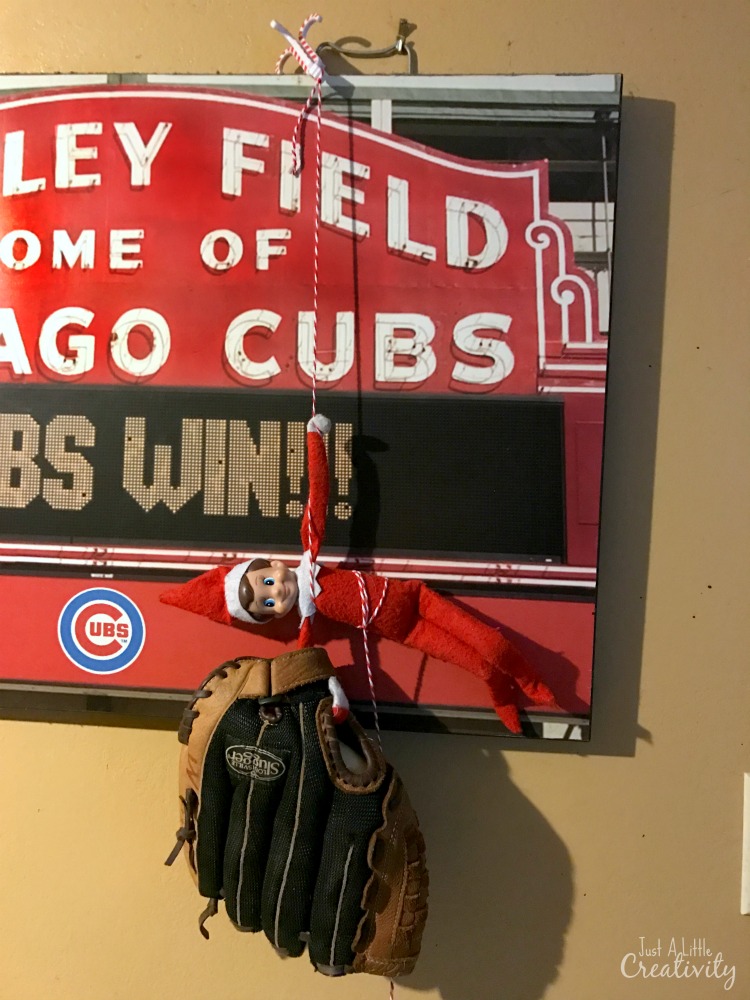 Elf on the Shelf is a hot dog-

This one is actually called “Mom forgot to move the elf last night, oh good we have hot dog buns”. It could also fall under the category of Bad Album Covers. 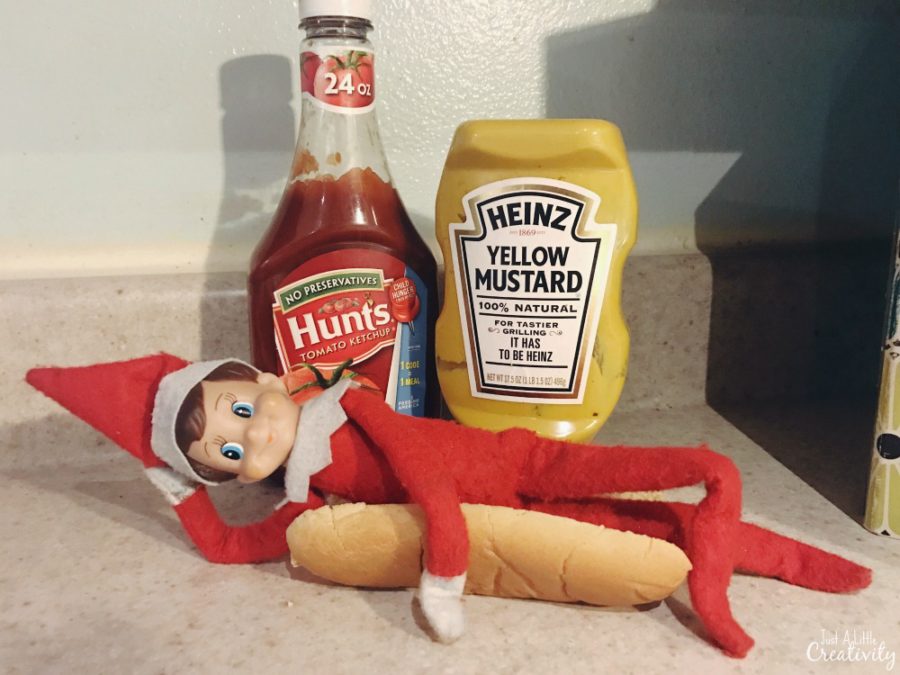 Don’t forget to brush and floss your teeth-

Also, if you’re scaling the mirror, you should find one of those cool toothbrushes that have a suction cup on the bottom. 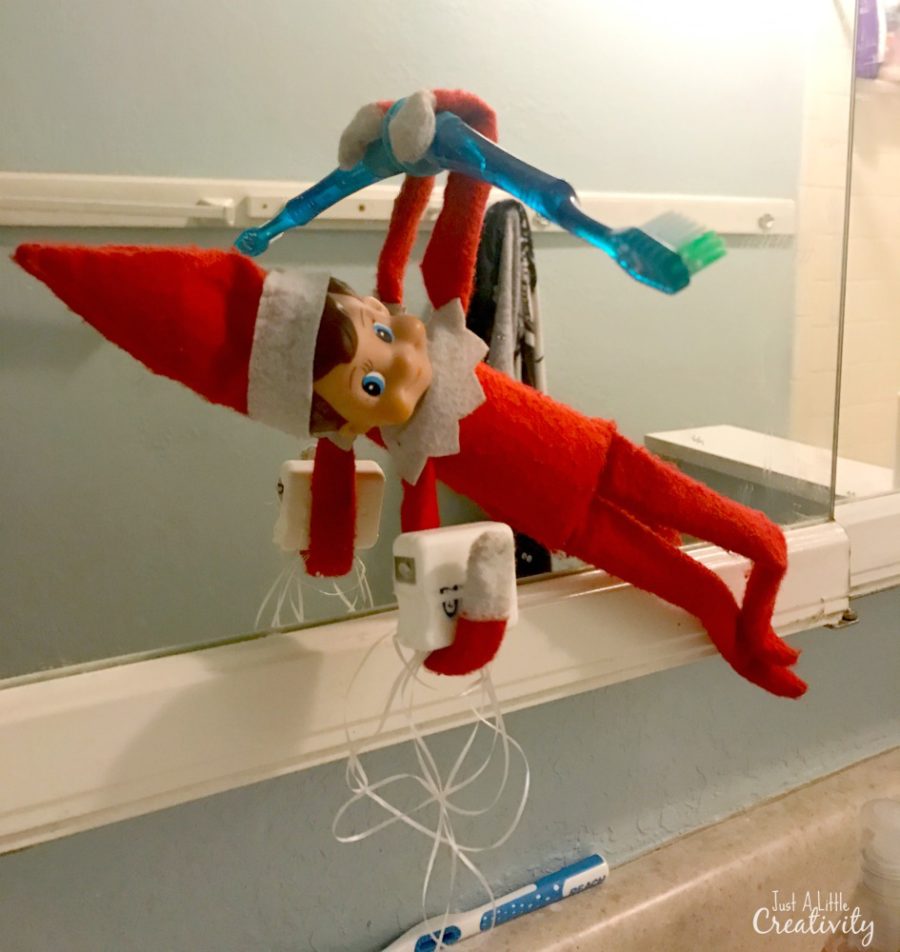 Because no-one ever uses this thing, even if I hang up a pretty one for Christmas, it took the kids forever to find him. Literally, all morning. Also, this one was admittedly a little boring, so “Way to Go, Elf” 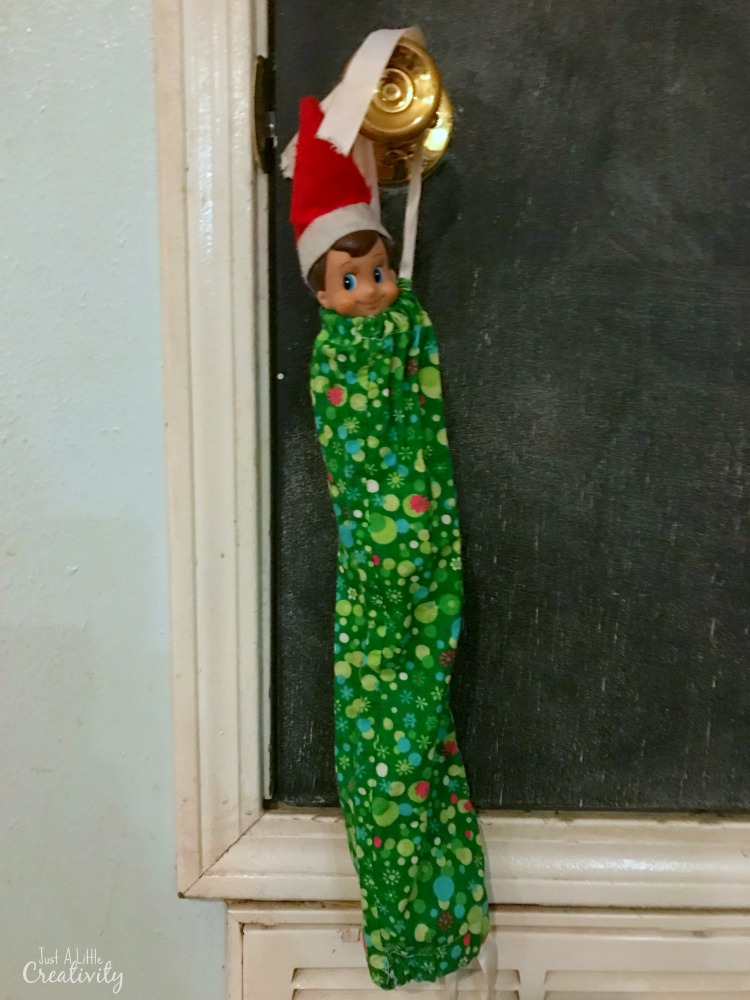 Its all apples and oranges, and also bananas-

And the elf is starting to loose his cool points, because hanging from the bananas is just too easy. 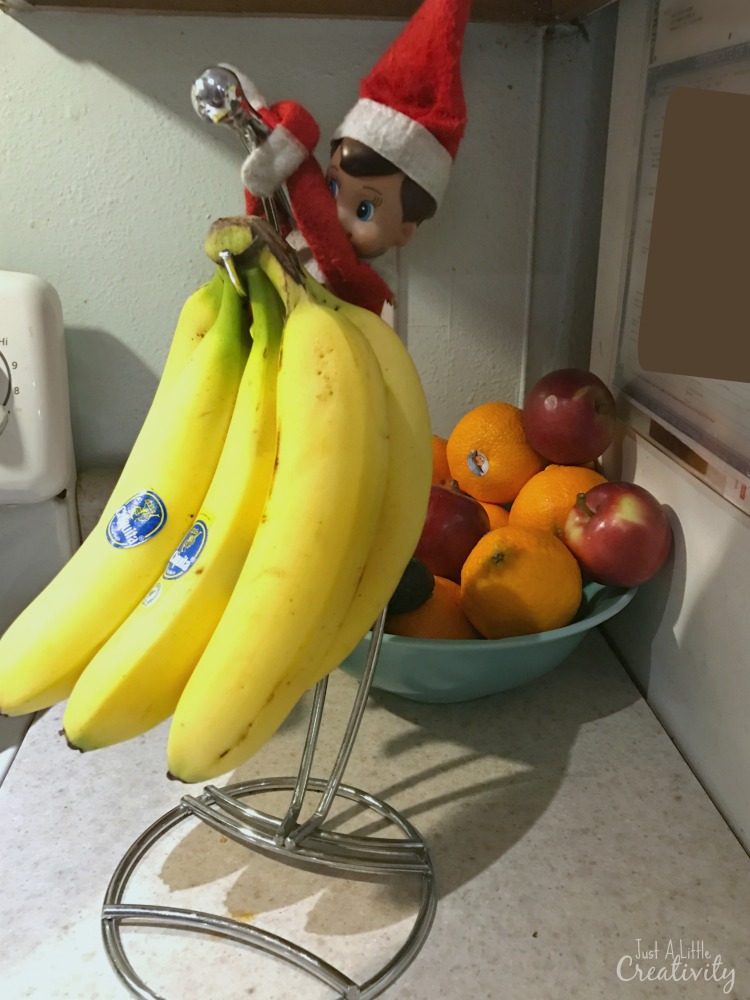 I often use affiliate links for products I discuss & recommend. Please see my PR Disclosure page for full details. 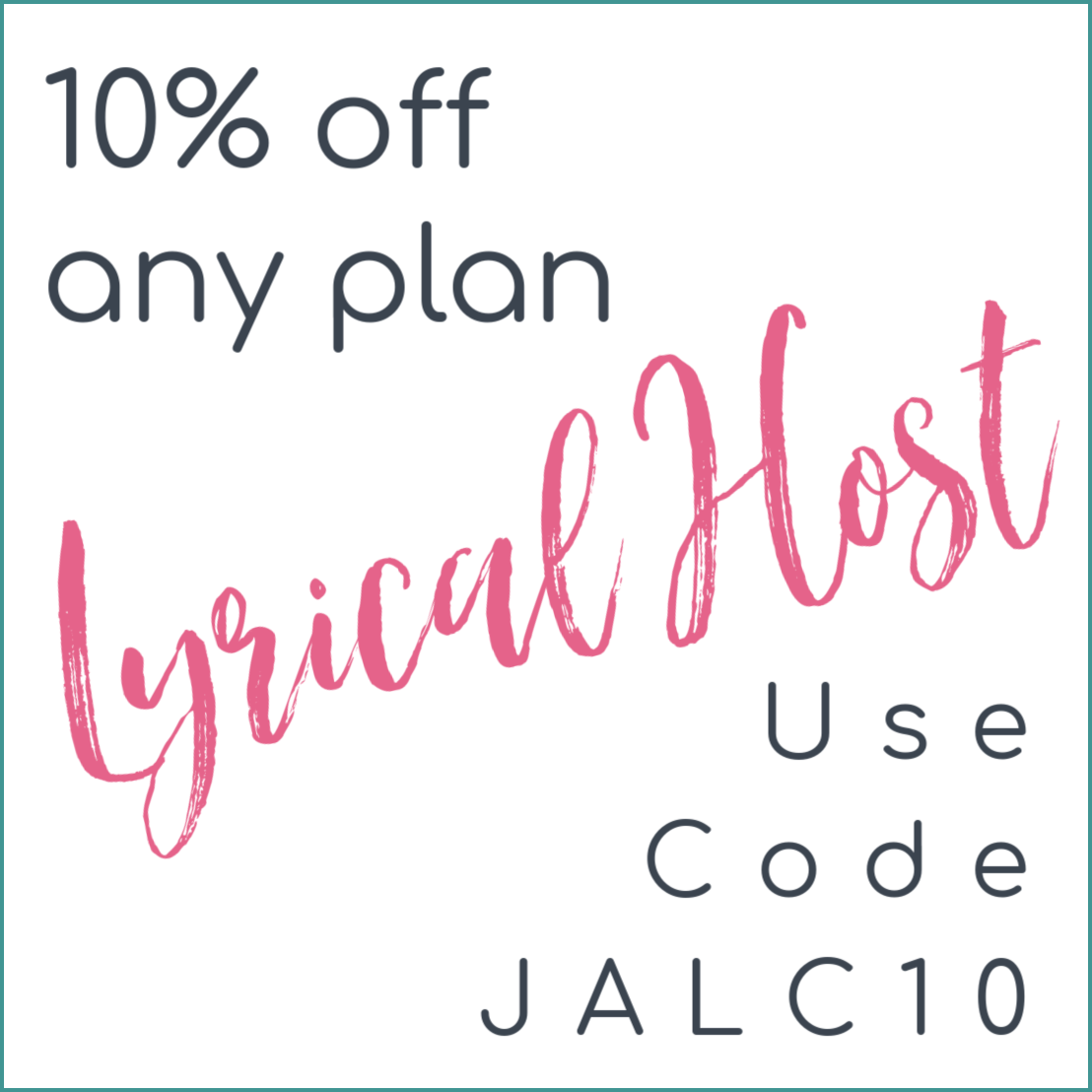 If you’d like to feature one of my projects or posts, one photo may be used, provided that full and clear credit is given to Just A Little Creativity with appropriate and specific follow direction to the original content.
Unauthorized use and/or duplication of this material without express and written permission from this blog’s author and/or owner is strictly prohibited.

Just a Little Creativity is a participant in the Amazon Services LLC Associates Program, an affiliate advertising program designed to provide a means for sites to earn advertising fees by advertising and linking to Amazon.com